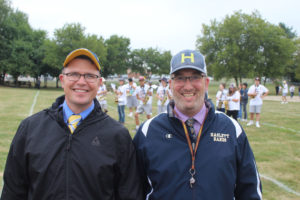 David Gott has taught for over 20 years and is currently Director of Bands in Haslett. His first six years of teaching were in the Crawford-AuSable School District (Grayling).  David was raised in Rochester, Michigan. Early on in his music experience, David began to study clarinet privately with Don Platter.  Later, he was to study clarinet with professors Linda Bartley, Margaret Donahue, and Kennen White at Central Michigan University.  David earned his Bachelors of Music Education and did some graduate work at Central Michigan University.

During his tenure in Haslett and Grayling, Dave’s bands have received consistent First-Division Ratings at both District and State level MSBOA Band and Orchestra Festivals.  His bands have also had several individual high school band members, as well as ensembles, nominated for All-State as well as the Michigan Youth Arts Festival. Mr. Gott has also been active as a clinician and adjudicator for Solo and Ensemble.  He was the MSBOA District II Honors Band Chairperson from 1998-2000, served as the Treasurer of M.S.B.O.A. District II from 2000-2003 and served as the MSBOA Chairperson of the Middle School/Elementary Music Workshop 2002-2004, Secretary for MSBOA District VIII from 2010-12, was most recently the Vice President of Adjudication and Ensemble in MSBOA District 8.  During the 2006-07 School Year Mr. Gott was nominated for “Who’s Who Among American Teachers”, and most recently was awarded membership in the American School Band Directors Association in 2012. David, his wife Kate of 21 years, and teenagers Madison and son Connor reside in East Lansing.

Michael Larsen is in his 19th year of teaching and is the associate director of bands for Haslett Public Schools.  Prior to his current teaching assignment Mr. Larsen taught for Kaleva Norman Dickson Schools, Manistee Catholic Central School, and Mio AuSable Schools.  Mr. Larsen earned his BME and MME Degrees from Central Michigan University.  He is an active member of the MSBOA having held many district and state assignments.   In 2007 he was elected into the membership of the American School Band Director’s Association (ASBDA).  Mike is happily married to his wife Meaghan, and they have three children, Madelyn, Caleb, and Kerstin.  When not teaching music he enjoys spending time camping with his family and getting out to enjoy pure Michigan.